Tilly: The True Story of a Rabbit Who Overcame Impossible Odds

The once beautiful red and white mini-rex rabbit lay suffering in her urine.  There had been no food for days, and the last of her water had been lapped what seemed like long ago.  Now she was too weak to move.  She was dying.  She wanted nothing more than an end to the burning on her side in the urine, the ache in her hind leg, the hunger demanding sustenance.

A young man, walking to his classes, passed by her hutch and felt concern.  But she wasn’t his and he was reluctant to interfere.  But after three days, seeing her always in the same position, his compassion forced him to lift her into his arms and take her home.  He then called the Colorado House Rabbit Society (CO-HRS) and was told to take her immediately to their veterinarian, Dr. Jerry LaBonde at Homestead Animal Hospital and the rescue organization would take responsibility for her.

The young man feared that Dr. LaBonde would report him for “stealing” the rabbit, but was assured that Jerry would be more likely to give him a medal.

The poor rabbit was in terrible shape.  She was starving and desperately dehydrated.  She had lain in her urine for at least three days straight, too weak to get up.  Urine scald blistered the entire left side of her body and the rear leg on that side was forced up, across her body, so it stuck out above her right side.

Dr. LaBonde anesthetized her, so she wouldn’t suffer as he cleaned her up and provided the required medical care.   Her incredible will to live, and Dr. LaBonde’s expertise, resulted in her survival of these efforts.   Finally, hydrated and awake, she began eating.  Jerry allowed CO-HRS to take her to continue her recovery, but warned them that she would never hop again. 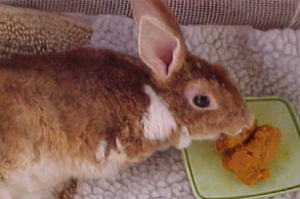 Tilly eating pumpkin, after she had gained weight, but before she could hop.

They named her Tilly and started her in an appropriately modified baby’s playpen.  To the delight of her caretakers, she was soon able to get upright on three legs, lean against the side of the playpen, and push herself around its perimeter.

Connie Conine, a retired occupational therapist, was always willing to guide the rescue in working with rabbits needing physical therapy.  She showed them how to slip a hand between Tilly’s side and the hip of the leg that was crossed under her, the idea being that, by walking with her that way, it forced the “bad” leg into its proper position, and she could hop a little.  Obviously, this was rather difficult for her caretakers—each had to lean over, slip a hand into place, and inch forward when Tilly hopped, without losing the position the hand was in.

But Tilly was startlingly intelligent, apparently understanding almost immediately what was needed.  She pushed the people away and conducted her own therapy! First, she put her weight on the crossed-over left hind leg, so it was held in place on the floor.  Then she eased her good right leg into the appropriate position next to the “bad” leg, and pushed to make a hop.  Of course, the “bad” leg immediately crossed back over under her.

But Tilly, understanding and pursuing the therapy, amazed everyone with her determination to continue the therapy.  She spent nearly all day, the first day, repeating the process, over and over and over.  Little by little, the “bad” leg moved closer to the position it should have been in, until she was able to take several hops.

Within a few weeks, having pursued her own physical therapy, Tilly was hopping normally!

It wasn’t long before Tilly was introduced to Elmo (a male rabbit of similar age who had also needed treatment when rescued). 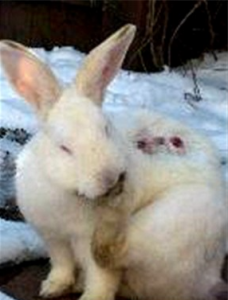 Elmo, who, after healing, was bonded with Tilly.

The pair was soon adopted by a couple, who provided an incredible home for them, including a garden with greens just for them, a back yard where they could run around, supervised, of course, free run of the house, and enormous amounts of love and attention. What a lovely reversal of life these two had!! 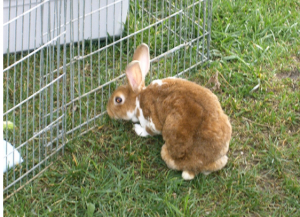 Tilly, brought to one of CO-HRS’s “Spring Flings” by her “mom and dad,” enjoying a visit with other rabbits there.

Posted in Animal News, Humane Education, Networking, Rescue Stories
×
...
×
...
×
...
Do NOT follow this link or you will be banned from the site! Scroll To Top