If you live in a house that has a basement, you probably have window wells, also called egress windows. A window well is a hole around a basement window that allows light to enter the basement and also offers human residents a means of escape in case of fire.

Unfortunately, window wells are also an open pit trap for wildlife. Once an animal falls into a window well there is usually no way out. Every year I get numerous calls about animals stuck in window wells. I have gotten many of them out but I also give instructions to homeowners that they can use to get the animals out themselves.

Animals commonly stuck in these “traps” are rabbits, skunks, prairie dogs, mice, and snakes. Not as common, but possible, are raccoons, foxes, squirrels, and birds. If there is not something the animal can grab or step onto to climb out, it can perish. Over the years I have gotten a lot of animals out of window wells–both dead and alive.

When houses are built, wildlife is rarely a consideration. Home builders could install chimney caps, good roof vents, or window well covers when they build a house–but they rarely do. These problems are left for the homeowner to deal with. Most often, the resident does not realize there is a problem until an animal ends up stuck or dead. What does a homeowner do about dangerous window wells? 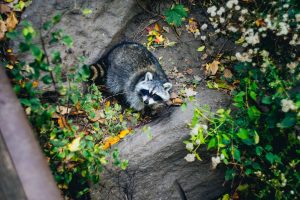 The easiest solution is to simply cover the hole. Hardware stores and online suppliers carry window well covers. Unfortunately, they are usually made out of plastic so they may only last a few years, but they are inexpensive. Others are metal and ornamental. The key to making a choice is what will be the most effective in blocking access for the local critters in your area? Take measurements to be sure to covers that fit but realize that sometimes none of them will fit, because window well sizes are not standardized. Plastic covers can be a challenge to fit but they work. Professional installers can install more complex products quickly and expertly, especially if there are municipal codes regarding escape ability from inside the home.

Another option is to have window well covers custom made. These can be expensive but they are very effective as long as the gaps in the grate are small enough so that small or young animals (like baby rabbits) cannot fall through. I have also known folks who have built a permanent ramp out of a 2’ x 6’ board with cleats placed every 4-5 inches so the animal can climb out. Some mammals have long claws for digging, but not for climbing. If you cannot put cleats on the board, wrap an old sheet, towel, or rubber carpet pad around the board so they can get a grip on it. Otherwise they may keep sliding down the board while trying to climb out. This idea can work but some animals may not be able to utilize ramps, so a cover would be best.

If the animal is small or a baby, you can put on a pair of gloves and remove the animal by hand. If it is a bigger animal or a skunk, you may not want to try this method. In that case a bucket, a pet crate, or laundry basket may do the job. Tie a rope to the bucket, basket, or crate, and put some food in it (example: skunks like cheese, most animals like canned dog or cat food), and use the rope to lower the bucket into the window well and turn the bucket or basket on its side. If you are using a crate, open the door. When the animal goes in to eat, use the rope to pull the bucket or basket up and out of the well. If it goes into a pet crate, use a stick to close the door, then pull it up. 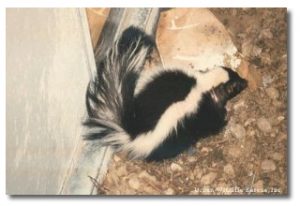 Sometimes you may have to wait for the animal’s stress level to subside before it will eat. You can also place some leaves in the bottom of the container to make a comfortable “cave.” Some animals are nocturnal and will go inside to sleep once they have eaten. If you suspect the animal has been in the window well for a day or more, lower some water down as well. Recheck in an hour or overnight, and then pull the sleeping animal up to freedom. If you do not want to take the time, move out of sight at least. Let the animal calm down as much as possible, so the smell of the food entices it inside the container.

Once you have the animal in the container and have pulled it out of the window well, allow the animal to run away. In the case of a skunk, you can walk  away from the bucket or basket, holding onto the rope and then pull the container over once you get about 10 feet away. If it is in a crate, use the stick to push open the door. If the animal is frightened, throw some food out and away from the container so it is motivated to come out.

I have gotten numerous animals out of window wells. I often use a net, because my time is limited onsite. My favorite is a cheap fish net with a handle about 3 feet long and about a 12 inch net on the end. When I put the net down the well the animal will usually run to the opposite corner, where the well wall meets the house. Then I move the net towards the animal. If it runs, it may run right into the net. If it does not, I use the net to gently push it against the side of the well until it will flops into the net. I do his with skunks all the time and rarely do they spray. If you are unsure of the skunk’s ability to spray, throw a towel over the top of the net. If your handle is long enough, you will be in the clear. Animals do not panic as much if they are covered.

Sometimes the window well is under a deck or overhang, like a bay window. It may be necessary to pull a few boards off of the deck to access the well so that a container can be used. I still prefer using my net–either from above or below. From below, I open the basement window, net them and carry them up through the house. This does have risks such as the animal getting loose in the house, but I have done this many times with skunks and have never had one spray.

Another problem can be that after a couple days an undiscovered animal may try to dig out under the window well. Once you find the trapped animal and try to use the net, the animal will often run into that hole when they see you or the net. In this case the ramp or baited bucket idea may be best. It may be necessary to wait for the animal to come out. Removing an animal out of a window well can be a hassle. If you have to call a professional it can be expensive too. Most professional “pest removers” kill whatever they trap. Be sure to ask what their protocols are—killing is not necessary.

Do you think it will not happen to you? You may have lived with open window wells for years and never had a problem. I hear this from people all the time when they call me with an animal stuck in their window well. Like an uncapped chimney, it is just a matter of time before an animal falls in. So get those window wells covered! The animals you prevent from falling into that “trap” will appreciate it.

Posted in Animal News, Community, Humane Education, Wildlife Info
×
...
×
...
×
...
Do NOT follow this link or you will be banned from the site! Scroll To Top