What is the Bird Flu?

The bird flu, also known as the avian flu, refers to the disease caused by a family of flu viruses primarily transmitted between birds. The dominant virus strain circulating currently is called H5N1. It is extremely contagious among birds, who spread it by shedding the virus in their saliva, feces and through nasal secretions. The virus originates in wild birds, but can spread to domesticated birds and lead to rapid, massive outbreaks. Avian influenza viruses are classified into two groups: Low Pathogenic Avian Influenza (LPAI) and Highly Pathogenic Avian Influenza (HPAI). LPAI viruses cause mild or no disease, while HPAI cause severe disease and high death rates in infected birds. Spread of the disease is largely blamed on the droppings of infected migrating wild birds. The strain of avian influenza currently found in the U.S. is highly pathogenic, meaning it’s likely to cause severe illnesses and death in infected poultry, including chickens, ducks, geese, quail, pheasants, guinea fowl and turkeys. Following recent outbreaks in Canada and the U.S., the virus is rapidly becoming a global concern. Outside of North America, outbreaks are being monitored in Asia, Africa, and Europe. However, public health officials say the risk of outside transmission to humans is low and the CDC said there is no evidence to suggest that the virus can be transmitted to humans from poultry that is cooked properly. Dogs and cats are not susceptible to avian flu but pet birds should be kept indoors and separate from outdoor flocks and exposure to wild birds. 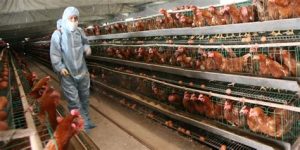 The current pandemic of avian flu is the worst outbreak in seven years and already has led to the deaths of millions of birds. The H5N1 virus has ravaged commercial and backyard poultry. Commercial outdoor flocks make up only a small percentage of U.S. egg production. About 6 million hens, or 2% of national flock, are free-range and about 4.2 million hens, or 1.3% of U.S. egg production, are from pasture-raised chickens. Chickens are categorized as free-range or pasture-raised primarily by the amount of time they spend outdoors and space they are provided. Free-range chickens typically must have at least 21.8 square feet of roaming space outdoors and remain out until temperatures drop below around 30 degrees F, according to the American Humane Association, which certifies egg operations. Pasture-raised chickens typically must have 108 square feet outdoors each and remain outside most of the year except during inclement weather. The certifying organizations have protocols for high-risk situations and allow for temporary housing indoors — a time period not specifically defined — once a farm documents an outbreak near an outdoor flock. Certification agencies monitor farms to ensure they do not use bird flu as an excuse to keep birds inside too long. For U.S. consumers, it means the free-range eggs they buy at a premium price could come from a chicken being temporarily kept inside. But producers say they think people who pay more for pasture-raised or free-range eggs have animal-welfare concerns and do not want the chickens to be endangered the virus. Consequently, egg prices have more than doubled in one month and fowl meat prices are not far behind. Availability will also be impacted as millions of birds die. 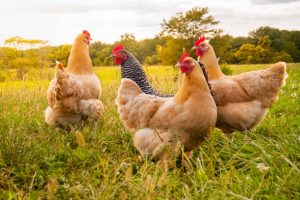 Research has not clearly proven significant immune system differences in chickens housed outdoors versus indoors. Speculation that lower density of animals, air movement and less sharing of equipment and staff in pasture-raised operations may contribute to a lack of virus infections. But the decision whether to bring hens inside to wait out the annual migration of wild waterfowl is a decision based on owners’ comfort level with acceptance of the risk. Experts have said they believe the virus made its way to the United States via an infected waterfowl migrating from Europe. Avian influenza is most commonly spread when healthy birds come in contact with bodily fluids from an infected (wild or domestic) bird, state officials have said. If an infected migratory bird defecates on a farm property while flying through the county, the virus can remain active and transmissible in the excrement for days. 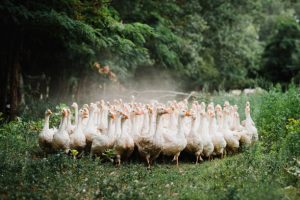 However, it also can be spread on contaminated clothes or equipment worn and used by people. Experts have encouraged farmers and backyard poultry growers to increase protective biosecurity measures. These include limiting nonessential access to farms; regularly cleaning farm-related clothing and equipment; not sharing equipment with other farms; and stepped up sanitizing of personnel and vehicles on farms. Experts encourage farmers to wear protective equipment — cover footwear with disposable booties, hair with caps and faces with masks. Most farmers have written biosecurity plans, which are required for them to qualify for government indemnity funding that’s available to cover some losses in the case that avian influenza wipes out their flock. The is also the potential for drying excrement to be kicked up as dust, wafting through the air, and getting sucked into chicken houses through ventilation systems. Aggressive efforts are launched to eradicate all traces of avian flu on farms where the virus is detected.

If infections of avian influenza are confirmed, emergency containment and clean-up plans are immediately implemented, including depopulation. Depopulation is a term used to describe the quick euthanization of birds in a flock in an attempt to slow the spread of illnesses to another flock. In close quarters, one virus-positive bird will infect many more, meaning entire flocks typically need to be destroyed. The goal is to make those kills as quickly and humanely as possible. In the case of large, multi-tier chicken houses, carbon dioxide gas is pumped in, and in barns where birds are kept on floor level, flocks are covered with fire-fighting foam. Both methods suffocate the birds. Awful as these methods sound, they are considered more humane than letting the birds suffer and potentially spread an illness that strangles them to death slowly.

Dead birds must be disposed of following methods approved by federal and state regulators. It is considered best practice to dispose of infected carcasses at the farm where they became sick and were depopulated. Composting is among the better options for disposal, he said, describing a process of layering carcasses and organic materials, like wood shavings, to create a controlled decomposition. During the months’ long process decomposition produces heat that kills off the virus and produces “good bacteria,” resulting in nutrient-rich, dirt-like humus. 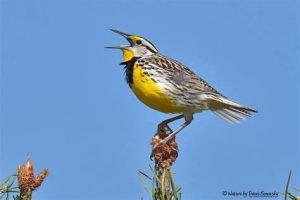 There is currently very low risk of an outbreak among wild songbirds, and no official recommendation to take down feeders unless you also keep domestic poultry, according to the National Wildlife Disease Program. They always recommend that you clean bird feeders and birdbaths regularly as a way to keep many kinds of diseases at bay.

How do we know songbirds are at low risk?

If songbirds are at low risk, why are people who keep poultry advised to take down their bird feeders?

If you keep nest boxes:

Avian influenza is rarely transmitted to humans, according to the USDA, but nevertheless our NestWatch project always advises good hygiene and highly recommends that people wear disposable gloves and/or wash their hands thoroughly after checking nest boxes. Most birds that use nest boxes are songbirds, which are at low risk for contracting or transmitting avian influenza. If you monitor waterfowl or raptor nests (e.g., Wood Duck, Common Merganser, Canada Goose, American Kestrel, Barred Owl), we suggest you wear gloves, change or wash gloves and disinfect equipment between nest boxes, wear a mask when cleaning out nest boxes, and change clothes and footwear before visiting any domestic poultry.

If you are a wildlife rehabilitator:

Wildlife rehabilitators should take precautions when accepting sick birds so that they don’t inadvertently introduce HPAI to the rest of their patients. Here’s further guidance for rehabbers, from USDA APHIS. Rehabbers in New York State are also encouraged to contact the Cornell Wildlife Health Lab for more information.

What to do if you find a sick or dead bird:

Avoid handling sick or dead birds. Instead, call your state wildlife health agency; they can determine cause of death and send the bird to the appropriate lab for testing. Additionally, keep pets (including pet birds) away from sick or dead wild birds. 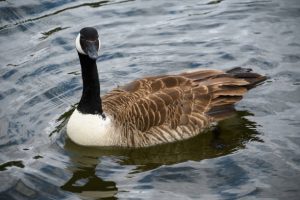 A portrait of a Canada Goose swimming on a lake

Bird flu will remain a problem for at least several more weeks as migrating waterfowl will remain on the move until June. In the past, warmer weather and the end of migration brought an end to bird flu cases, allowing turkey and chicken farmers to begin the month’s long process of replenishing flocks and resuming production. In the meantime, vigilance is the key. Zoos, rescues, sanctuaries, and other bird-keeping organizations have pulled their flocks indoors or mitigated their outside enclosures for protection of their flocks. Visitors to entertainment or rescue venues will be kept away from flocks due to the highly transmissible nature of the virus. Most precautions will relax after the migratory season, but egg and meat prices may remain high for the foreseeable future.

If birds are your passion, consider a donation to your favorite  zoo, rescue, or sanctuary, to help them offset the increased cost of special protective construction, loss of visitation fees, and alteration of business.

Posted in Animal News, Community, Humane Education, News Release, Wildlife Info
×
...
×
...
×
...
Do NOT follow this link or you will be banned from the site! Scroll To Top