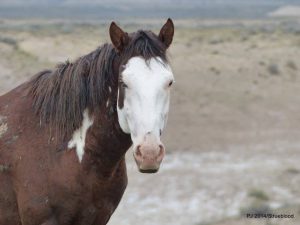 The Bureau of Land Management (BLM) began the roundup of the horses in Colorado’s Herd Management Area (HMA) called the Sand Wash Basin (SWB), on Wednesday, September 1st. Prior to the roundup start, the BLM promised to release 50 horses (25 mares and 25 stallions) back to the HMA at the end of the roundup. The horses to be released would be determined by the Sand Wash Advocates Team (SWAT) to ensure the genetic diversity of the remaining herd. At the end of the roundup in September, the BLM had removed more than 600 horses. The following day, 49 horses (25 mares and 24 stallions) were released back into the Sand Wash Basin. The 25th stallion on that list was Picasso Junior (PJ) the son of the famed Sand Wash Basin stallion Picasso.

When PJ was rounded up, and located in the BLM corrals, it was noticed that he had an eye issue. As a result, he was transferred to Canyon City with the rest of the horses instead of being released back into the SWB. He was later examined under anesthesia by a USDA veterinarian, and it was determined that he had a cancerous eye. The SWAT team immediately went to work to find a sanctuary that would take PJ to live out the rest of his life. There were multiple sanctuaries that offered to take him, but the BLM refused, and instead euthanized him in early October. It’s not clear why the BLM was so adamant that PJ would not be allowed to live out his life at a Sanctuary.

SWAT then began an evaluation of the stallions captured to choose another one to take PJ’s place as the 25th stallion to be released. Picasso’s grandson, Michelangelo was selected. To date, the BLM has not agreed to release Michelangelo. 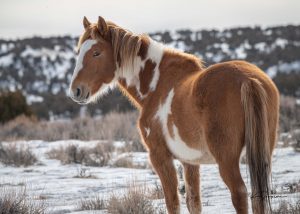 Photo B: Michelangelo, the grandson of the famed stallion, Picasso

A grass roots effort has been started to lobby the BLM to release Michelangelo for Thanksgiving.
If you’d like to add your voice to this effort:
Please contact the BLM Little Snake Field Office, in Craig, Colorado and ask them to #pardonawildmustang for Thanksgiving. Phone: (970) 826-5000 or Email: bsillitoe@blm.gov

Posted in Animal News, Editorial, Humane Education, News Release
×
...
×
...
×
...
Do NOT follow this link or you will be banned from the site! Scroll To Top