The roundup in the Sand Wash Basin Herd Management Area (HMA) in NW Colorado started on Wednesday, September 1st. The Bureau of Land Management’s (BLM) own documentation states that the helicopters should travel at a speed that matches the slowest horse to not separate foals from their mothers. This requirement was violated at least 2 times, and one of those foals is shown below. 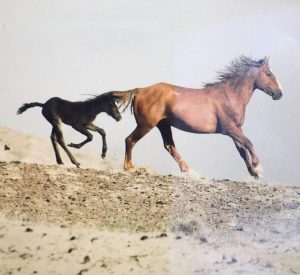 On September 6th, for the second day in a row, foals could not keep up with the horses being terrorized by the helicopters and were separated from their families. For the second time, a hero bachelor stallion took care of an orphaned foal separated from its mother. In the image above we see the stallion Merlin, and at that time, an unknown little black foal with a star on the forehead.

Merlin cared for this little foal as best he could by providing protection. 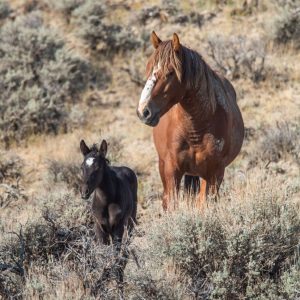 Photo B: Merlin watches over the tiny foal separated from its mother

Merlin then did all he could, by leading it to the corrals where the horses had been rounded up – hoping to reunite this foal with its mother. 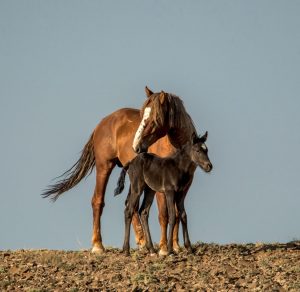 Photo C: Merlin and foal on the rise above the BLM holding pens

For his efforts Merlin and the tiny foal were captured. Although the BLM took precautions to keep the photographers from seeing how they were treated, a quick picture taken on the sly, shows the tiny foal being pushed into the corral by helicopter after the mounted cowboy was unable to get her into the pen. 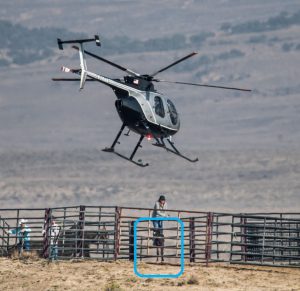 Photo D: Tiny foal in the lower middle of the image pushed into the corral by helicopter

Another photographer saw Merlin jump the 7 ft. corral fence and regain his freedom, and this hero stallion is still free in the Sand Wash Basin today.

At the time it was thought that the little filly’s mother had already been shipped to Canyon City and could not be easily reunited, so she was taken to a local Veterinarian in craig, CO and later to a foster family, where she received care and feeding by bottle. 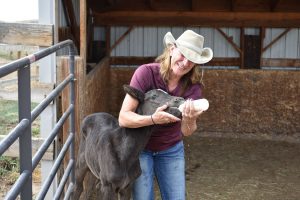 Photo E: Filly learns to drink from a bottle with help from foster volunteer, Jane

Meanwhile, the Sand Wash Basin Advocate Team (SWAT) investigated who this tiny horse was. A photo taken on Sept 3rd showed that her mother is Serendipity, and her father is Snip. Making this filly Sand Wash Basin royalty as the granddaughter of Picasso on her father’s side, and the granddaughter of Blue on her mother’s side. The tiny filly also received a name, StellaLuna. It turned out that Snip and most of his band were rounded up and are in the holding pens in Canyon City, and Serendipity remains free in the Sand Wash Basin. Unfortunately, the precise location of Serendipity was not known, and StellaLuna could not be reunited with her mother. 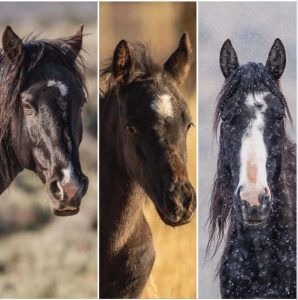 It was determined that the best place for StellaLuna would be at a sanctuary. She now lives at the sanctuary, For The Love of Aria, where she can run free with her new friends and will be cared for and safe.

Photo G: StellaLuna finds a new home with friends and room to run at For The Love of Aria sanctuary

StellaLuna will have a great life, but her care will be an ongoing expense for the sanctuary, if you’d like to help, please reach out to For the Love of Aria for ways to donate at the locations below.

We should also remember all that has been lost.

This baby horse has lost her mother and family …

Serendipity has lost her baby …

Is this how we want our National Treasure Wild Horses “managed” by the Bureau of Land Management (BLM)?  As citizens, we need to continue to make our voices heard regarding how the BLM is treating the wild horses and managing the use of the Herd Management Areas.

The wild horse advocates, public activism and political intervention, specifically by First Gentleman Marlon Reis and Governor Polis are directly responsible for the Sand Wash Basin roundup ending early. This resulted in an additional ~154 horses remaining wild, so We Can Make A Difference!

The Great Escape Mustang Sanctuary (GEMS), in a partnership with the Sand Wash Advocate Team (SWAT) will be coordinating with the BLM to adopt and place Sand Wash Basin horses into sanctuaries, if possible, when they come up for adoption in February-March 2022. If you’d like to support their effort, make donations, etc. please go to their websites or Facebook pages:

For The Love of Aria Sanctuary:

Photo A: By Robin Wadhams, Photographer (used with permission of the SWAT Facebook page)