The 2021 wild horse helicopter roundup in the Sand Wash Basin Herd Management Area (HMA) in northwest Colorado took place in the first week of September, 2021. The Bureau of Land Management’s (BLM) own documentation states that, “Helicopters should travel at a speed that matches the slowest horse, to avoid separating foals from their mothers.”

However, on September 6th, a small black foal did become separated from her mother. She could not keep up with her herd as they were terrorized by overhead helicopters. In the wild, natural predators attack “prey” animals like horses by jumping onto their backs, in order to bite the neck and severe the jugular or spinal column of their victim. Wild or domesticated, all horses have innate fear of overhead objects. Helicopter roundups are especially inhumane because they arouse panic and a subsequent frenzied stampede in an entire herd. As horses run from the large object chasing them from above, they often trample each other, break bones, and lose their young—due to their hysteria and primitive instinct for self-preservation. 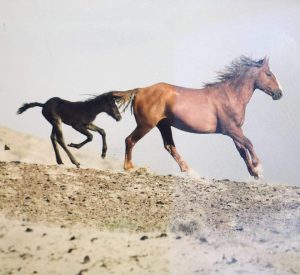 But on that day, a hero bachelor stallion took care of the lost filly. The stallion Merlin took responsibility for the unknown little one-week-old with a white starred forehead. He slowed his pace, stuck by her and ended up captured. When it became clear he could no longer protect her in the enclosure pen, he sprung over the fence from a standstill, and returned to the wild. But the tiny foal was imprisoned with adult horses she did not know, and without her mother. Human observers named her StellaLuna.

One year later, StellaLuna celebrated her first birthday on September 1st. After rescuers intervened at the capture site, she was transferred and cared for at a foster home where she was bottle fed, and as a seven-week-old, quickly transitioned to drinking from a bucket. The filly is now a yearling living at For the Love of Aria Sanctuary (FTLOA) in Kiowa, Colorado.

StellaLuna during her first year.

When she arrived at the FTLOA Sanctuary on October 23, 2021, StellaLuna was placed with Charlie, an older mare who had lost her own foal earlier in the year. Charlie and StellaLuna formed a bond and now share a strong mother/daughter relationship. In the wild, a band of horses may contain several mares, and StellaLuna also became friends with a younger mare, Telluride (Telly). Both Charlie and Telly will provide a loving and instructive relationship with StellaLuna for at least five years to help negate the “orphan foal” mentality that results when young horses are separated from their mothers. “Orphan foal” occurs when young horses have no way to learn horse manners and respect for others–in other words, horse etiquette. Despite the best intentions of human rescuers, the foal who is raised exclusively by people loses their sense of a human’s personal space and an even greater loss of their own personal space and natural flight response. This can lead to the foal becoming nippy and pushy, which becomes a concern as the cute baby becomes a full-sized horse.

Gina, the founder of FTLOA, explains, “As humans we can only mimic horse behavior to a certain extent. So although we had to teach StellaLuna about vets and farriers we really tried to stay hands off as much as possible and let Charlie teach her typical young horse behavior and boundaries. Since StellaLuna was just a week old when she was separated from her mother it was crucial to put her with other horses.” StellaLuna is learning to be a horse! 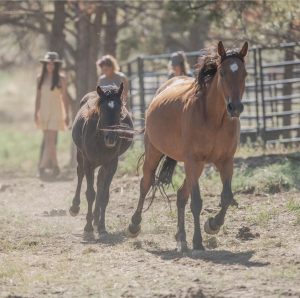 Gina says, “Raising orphaned foals is such a fine tuned balance between letting them be a horse but also understanding that at some point they will be full sized and much bigger than us. We do teach the human interaction piece intentionally, in a clear and understanding way. Giving StellaLuna a voice so she feels safe, but also keeping ourselves safe is like a choreographed dance that requires us to understand the language of Equus, which takes years and years of learning.

“Yearlings also really push their boundaries and in a herd. Multiple mares teach the young horses, so once again it is important to give StellaLuna a band composed of different aged mares as well as a gentle gelding to teach her the things humans cannot.” She describes the yearling StellaLuna as a curious girl who loves people, enjoys being groomed, and is polite around people and fellow equines.

A typical day for StellaLuna is very similar to life in the wild. She lives as part of a family band lead by a gelding named Renegade, with Charlie, Telly, an older mare named Lark, and four other yearlings to run and play with. They reside in a large pasture, not in the overcrowding of a capture pen–the fate of many wild horse roundup victims. Another concern with orphaned foals is nutrition, so the sanctuary works closely with a veterinarian to ensure all of StellaLuna’s nutritional needs are met as she grows up.

StellaLuna at last has a peaceful, safe, natural, and happy life. 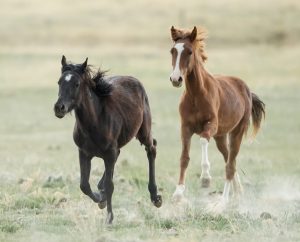 Note: StellaLuna’s care will be an ongoing expense for the sanctuary. If you’d like to help, please reach out to For the Love of Aria for ways to donate below:

For The Love of Aria Sanctuary:

Photo A: By Robin Wadhams, Photographer (used with permission of the SWAT Facebook page)

Photo B: By Scott Wilson, Photographer (www.facebook,com/fortheloveofaria) (used with permission)