In their proposed bill, the legislators stated thousands of lives and injuries could be saved (both animal and human) by creating wildlife crossings over major mountain highways. They said, “In Colorado, nearly 4,000 wildlife vehicle collisions (WVC) are reported each year, though it’s estimated that a more accurate figure is 14,100, given the number of unrecorded collisions. These WVCs have tragic consequences, including hundreds of human injuries and some fatalities, as well as the death of thousands of animals on roadways in our state. The annual cost of these devastating accidents is approximately $80 million in property damages, emergency response costs, medical treatments, and other costs. This figure does not include the value of lost wildlife—likely $24 million—or the impact on the health of wildlife populations.”

Thanks to these proactive legislators, Governor Jared Polis signed SB22-151 Safe Crossing for Colorado Wildlife and Motorists Act​ on June 1, 2022. The bill creates, “the Colorado wildlife safe passages cash fund for use by the Colorado Department of Transportation (CDOT) to provide funding for projects that provide safe road crossings and connectivity for wildlife, and that increase motorist safety by reducing wildlife-vehicle collisions.”

The bill says: “The act creates the Colorado wildlife safe passages fund within the state treasury and transfers $5,000,000 from the general fund to the fund. Money in the fund is continuously appropriated to the department of transportation to provide funding for projects that provide safe road crossings for connectivity of wildlife and reduce wildlife-vehicle collisions, for the full range of wildlife crossing project needs, and for matching requirements for federal grant programs relating to wildlife crossing projects.

“SB22-151 will create the Colorado Wildlife Safe Passages Fund to invest $5 million (as amended in Senate Appropriations Committee on 6/2) of state general funds in measures to reduce wildlife-vehicle collisions and reconnect habitat fragmented by roads. This includes projects identified in Colorado Department of Transportation’s 10-year pipeline of 25 projects with wildlife infrastructure components, as well as projects identified by the Colorado Wildlife & Transportation Alliance, state agencies, and county or tribal governments. The fund would also provide a much-needed source of matching funds to leverage myriad federal grant opportunities available in the new infrastructure law.”

In addition to the obvious injury/mortality figures, insurance companies consider a WVC a comprehensive loss, not an “at fault” accident against the vehicle owner. Consequently, all Colorado drivers bear the cost of every collision, via increased premiums, because insurance companies spread the risk among all policyholders. So even if a driver never travels outside of Denver, their rates could still increase because of vehicle/animal accidents. Lowering the incidents of WVCs would not only save automobile insurance companies expenses, but would also lower premiums for all Colorado drivers.

SUCCESS OF THE WILDLIFE CROSSING PROJECT ON COLORADO STATE HIGHWAY 9

According to The Center for Large Landscapes Conservation (www.largelandscapes.org), “these kinds of crossing projects have proven highly effective. For example, in 2015 and 2016, Colorado’s first two wildlife overpasses, five wildlife underpasses, 10.3 miles of wildlife exclusion fencing, and other mitigation features were constructed on State Highway 9 between Kremmling and Green Mountain Reservoir. These investments resulted in a 92% reduction in reported WVCs and reconnected habitat for many iconic species, such as deer, elk, pronghorn, moose, sheep, black bear, mountain lion, bobcat, and coyote.”

Over 30 crossings or underpasses have been completed in Colorado thus far and trail cameras show the crossing are being used not only by large animals, but by raccoons, fox, coyotes, and even beavers. Extrapolating those results across the state, (based on the aforementioned estimated expenses of $75 million) that could result in a potential savings of $67,500,000. Plus, an immense decrease in hundreds of animal and human injuries.

Colorado Animal Protectors salutes and congratulates the four legislators, the governor, CDOT, and all who contributed to the studies, legislative efforts, and final passing of this pro-active, humane, and necessary law to make Colorado a safer place to drive for both residents and tourists. By assisting and protecting wildlife in their natural migration/behavioral activities, Colorado is setting a precedent and excellent example of respectful co-habitation with all residents of the state. 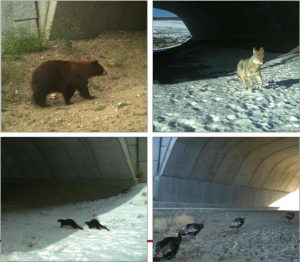 Posted in Animal News, Animal Stories, Community, Editorial, Humane Education, Networking, News Release
×
...
×
...
×
...
Do NOT follow this link or you will be banned from the site! Scroll To Top