In Colorado, nothing is as iconic and western as children and horses. A new program now connects the two—the “Reading to Horses,” events sponsored by the Arapahoe County Sheriff’s Mounted Unit and local elementary schools.

But how and what does a child read to a horse?

In May, 2021 the Arapahoe County Sheriff’s Mounted Unit launched their “Reading to Horses” program. Lt. Rich Anselmi, who heads the mounted unit, came up with the idea and modeled it after the “reading to shelter dogs” programs being implemented around the state. The mounted patrol visits Cherry Creek and Littleton School District elementary schools and helps children increase their literary skills by reading aloud to the police horses. 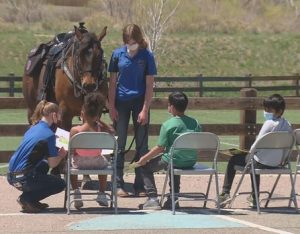 Lt. Anselmi said, “We had to figure out what book the kids could read to the horses, so I decided let’s write our own book!” Lt. Anselmi wrote a children’s picture book about Benelli, his own horse. Benelli is a 14-year-old blue roan gelding who once belonged to his niece when she rode in Jefferson County’s Westernaires.

Deputy Matteo Montoya-Collis illustrated the book. Both officers decided to produce a book that was educational, but also broke down traditional racial and law enforcement stereotypes. After months of brainstorming, writing and drawing, they self-published The Happy Police Horse.

“It’s really about getting the children familiarized with some of our laws, but there’s also an educational side to the book,” said illustrator Deputy Matteo Montoya-Collis. “We want them to learn how to read and we want them to have a good time reading our book, so they can remember having a positive interaction with law enforcement.” Not to mention getting used to being towered over by a gigantic, attentive face!

Lt. Anselmi says, “Nothing is as effective as a community outreach tool that I’ve seen in twenty-two years of law enforcement.” Kids love to interact with the horses and being around such large animals teaches them confidence around, and compassion for all animals. He said other Colorado police forces, including Denver, are considering the Reading to Horses program as well.

Thanks to generous donors, every child who attends a Reading to Horses event is given their own book to take home and share with their family. 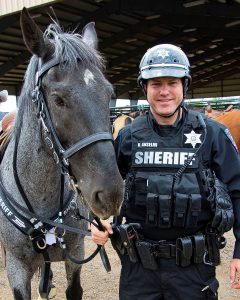 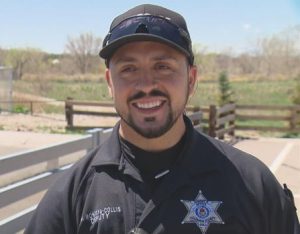 A New Division for ACSO

The Reading to Horses project is an offshoot following Arapahoe County Sheriff’s Office launching a new horse patrol unit in June 2020, after 30 years without horses in law enforcement. The strategy behind using mounted deputies is to create a visible and approachable presence in neighborhoods.  Studies in the United Kingdom and the United States have proven that higher visibility of law enforcement translates directly to less crime and increases public trust.  Studies have also shown that officers on horseback are six times more visible and considered more approachable than officers in patrol cars.

“This is great for the sheriff’s office as a community outreach,” said Deputy Kochaneic, who is an instructor and has also been trying to start up the unit for several years.  “It’s so powerful, especially with the kids, but it is just amazing what a horse can do for the relationship between police officers and citizens.”

Now involving community members as young as age fourteen, citizens assist ACSO deputies patrolling the parks and trails of Arapahoe County and the City of Centennial.  ACSO is one of the only agencies in the country to include teenagers in its unit. Arapahoe County decided to involve teens into the program because it allows young people to become involved in law enforcement, service to their community, and provides a bridge between the sheriff’s office and all ages of constituents in the community.

The horses used by deputies and volunteers are personally owned by their riders—both officers and volunteers. They are responsible for their horse’s daily care, although the horse and rider are trained to work in a law enforcement capacity as peace officers. The mounted patrol unit has been an effective conduit of positive relationships in the community and provided productive interactions between law enforcement personnel and citizens.

People trust officers more who utilize either dogs or horses in their work—perhaps because seeing the animal/human bond makes the officer appear as a more compassionate human and less of an intimating, authoritative object. Citizens can identify more closely to another person who has a shared relationship with an animal. Mounted officers’ images are softened in the public eye when they appear with a mellow, charismatic horse.

The mounted unit not only enhances community outreach, it aids in search & rescue, and provides routine area patrols. The unit is seen most often during parades or assisting in directing traffic around the county, but it also plays a vital role in missing people cases, said Montoya-Collis. Members also travel to the Colorado Center for the Blind and other facilities for disabled children, the Arapahoe County Fair, Highline Canal, and Cherry Creek State Park. 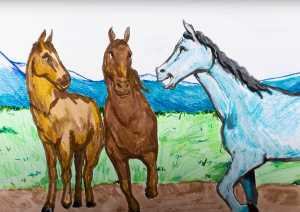 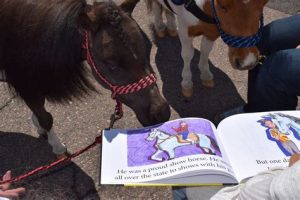 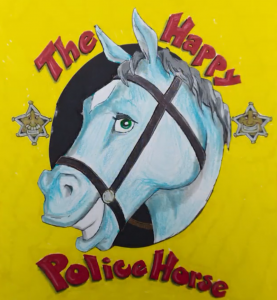 The Happy Police Horse is available for purchase through the Arapahoe County Sheriff’s Office. Proceeds support the Back the Blue K9 Force, which is a nonprofit organization that supports law enforcement service animals. For every book purchased, the sheriff’s office will provide a free book for a child in need.

Please contact mountedpatrol@arapahoegov.com if you have any questions about the unit, or are interested in becoming a volunteer.

Posted in Animal News, Community, Humane Education, Networking
×
...
×
...
×
...
Do NOT follow this link or you will be banned from the site! Scroll To Top