Lessons From a Mangy Coyote: Why Anticoagulant Rodenticides Must Go

By Guest Blogger Will Falk, Writer, Lawyer, and Environmental Activist

Heartbreak in the Wild

The first time I saw a coyote with mange my heart broke. Most of her fur was gone. Her skin, covered with scabs and lesions, had a sickly pink pallor. Her tail seemed stuck between her legs. And, her movements, as she stumbled through a ditch next to a Colorado country road, were lethargic and listless. Just the sight of her made my own skin chafe and itch. As I hugged myself to ward away the horror, my fingernails dug into my own skin, scratching at the backs of my arms. The experience educated me in the realest ways about what the phrase, “it made my skin crawl,” truly means.

After witnessing this, I had to know more about what I had seen. I learned that this coyote was suffering from what scientists call sarcoptic mange, which is caused by mites who live in the skin of many wild canids. In burrowing into the animals’ skin to lay their eggs, these mites cause intense irritation and itchiness, scabbing, and hair loss. An animal affected by mange can develop secondary bacterial skin infections, too. Worst of all, mange can be fatal for animals if left untreated. With the loss of their fur, animals affected by mange often freeze to death. And, if the cold doesn’t kill them, those secondary bacterial skin infections exacerbated by excessive scratching will.

While mange does occur naturally, recent research suggests that the widespread use of anticoagulant rodenticides – a type of rat poison – weakens the immune systems of animals and makes them more susceptible to mange. A 2017 study linked anticoagulant exposure to mange in bobcats, for example. Notoedric mange – which affects felines and is closely related to the sarcoptic mange that affects coyotes – ravaged the population of urban bobcats at Santa Monica Mountains National Recreation Area in southern California from 2002-2005. After mange was detected in 2001, the average annual survival of these bobcats plummeted by 49%. Mange-infected bobcats were necropsied and 98% of infected individuals had been exposed to anticoagulant rodenticides. These bobcats also had greater amounts of anticoagulant rodenticides than bobcats who did not die with mange.

After reading the results of the bobcat study, and against my better judgment, I was compelled to find images of bobcats with mange. I was met with the stares of blue-eyed bobcats, stripped of fur and looking like hairless, Sphynx cats. Unlike Sphynx cats, these bobcats were not bred selectively to be hairless. Their hair had been stripped and their skin ravaged by mites because they had eaten rodents who had eaten too many anticoagulant rodenticides. 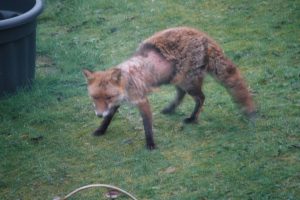 What are Anticoagulant Rodenticides?

Rodents exposed to anticoagulant rodenticides don’t just bleed to death – they bleed to death slowly. Rodents are very intelligent. They are so intelligent, in fact, that the use of toxins that immediately harm a rodent have proven to be completely ineffective because rodents learn not to eat things that instantaneously kill their kin. Anticoagulant rodenticides are effective because they can be mixed with rodents’ favorite foods as bait and the 3-7 days it takes for exposure to kill rodents makes it very difficult for them to understand what is killing them.

Predators of the Victims

Rodents usually do not die for several days after consuming a lethal dose. This means they may continue to move through habitat shared with predators and they may continue to feed on poisoned bait. Additionally, rodents – exposed to anticoagulant rodenticides and who may be hemorrhaging internally – spend more time in open areas, stagger as they move, and sit motionless before death. All of this makes them easier prey for predators.

Coyotes, and especially urban coyotes, rely heavily on rodents for food. And, it appears anticoagulant rodenticides are harming coyotes. Scientists in the Denver metropolitan area, for example, researching the effects of anticoagulant rodenticides on coyotes, found a dead juvenile male with no obvious external injuries or other signs of trauma. However, when they necropsied the young coyote, they “found free blood in the abdominal cavity” and “a puncture wound [that] was present on the left side of the body overlying the spleen but not penetrating the abdominal wall.” They determined that the coyote died from “acute severe hemorrhage, disproportionate to the amount of trauma observed.” The coyote’s liver tested positive for an anticoagulant rodenticide. In other words, it’s likely that the rodenticide in the coyote’s body turned a minor injury lethal.

These scientists found another young male coyote dead on a two-lane road “with minor evidence of skin tearing over the ventral neck and chest.” When they necropsied the coyote, they found that the coyote’s chest was filled with blood and they concluded that the coyote was killed by “severe acute hemorrhage, disproportionate to the mild to moderate trauma received from being hit by a vehicle.” The scientists suspected rodenticide exposure. And, sure enough, the coyote’s liver tested positive for two types of anticoagulant rodenticides. Again, rodenticides turned a small injury into a coyote’s death. 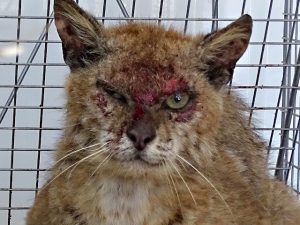 There have been many more studies demonstrating the harmful effects anticoagulant rodenticides have on non-rodent species. Some of these studies include harmful effects on buzzards, mountain lions, otters, endangered European mink, polecats, and, even freshwater fish. Anticoagulants act on all vertebrates – not just the rodents they’re intended for. Scientists have also discovered anticoagulant rodenticides in raw and treated wastewater, sewage sludge, estuarine sediments, and particulate matter suspended in the air.

Rodents, and all those who eat them, need us to stop the manufacture and application of anticoagulant rodenticides.

Individual home or other property owners, as opposed to government or business entities, account for a portion of total anticoagulant rodenticide use. If these individuals could be convinced to live and let rodents live, or to employ non-lethal, non-toxic measures such as blocking holes and other openings rodents use to access buildings, practicing better sanitation, or trapping rodents and removing them to better habitat, then the total use of anticoagulant rodenticides could be reduced. Anticoagulant rodenticides are simply more economical. Sealing up holes in a house and live-trapping rodents can be costly and can require much more labor than using poison.

It is highly unlikely that governments will ever impose a true ban on anticoagulant rodenticides. The agricultural lobby is one of the most powerful political forces in American politics. Meanwhile, in the United States, rodents are responsible for an estimated $19 billion in economic damages annually through the consumption and contamination of stored grains. Rodents don’t just pose a threat to agricultural interests, either. A British study, which attempted to determine the cost of physical damage to the built environment caused by rodents, estimated that rodents cost the British economy £200 million per year.

California did not ban anticoagulant rodenticides. To understand this, we must look to the actual text of the California Ecosystems Protection Act of 2020 (also known as Assembly Bill No. 1788). Courts applying law do not rely on newspaper headlines – they rely on what a piece of legislation actually says.

If we scroll down to the exceptions provided in subdivisions (e) and (f), we see how hollow this “prohibition” really is. Subdivision (e) declares that the prohibition does not apply to governmental agency employees who use second generation anticoagulant rodenticides for public health activities or for protecting water supply infrastructure and facilities; to mosquito or vector control districts; to efforts to eradicate nonnative invasive species on offshore islands; to efforts to control an actual or potential rodent infestation associated with a public health need, as determined by a declaration from a public health officer; or for further research into the dangers posed by second generation anticoagulant rodenticides.

To repeat, it is unlikely that governments will ever truly ban anticoagulant rodenticides. This does not mean that we have no power to stop the manufacture and application of these poisons.

What can you do?

If we truly want to protect rodents, and the predators who eat them, from horrible deaths, and if we truly want to keep these poisons out of the natural communities we depend on for life, we will have to do it ourselves.

2) Raise awareness about the harms of anticoagulant rodenticides.

3) Push for legislation to limit the use of anticoagulant rodenticides. 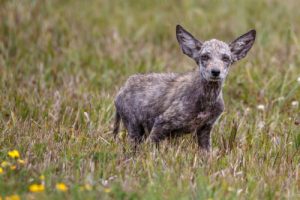 A Desperate Call for Help

As with any truly effective tactic that impedes humans’ ability to destroy the natural world, stopping anticoagulant rodenticides will require exceptional bravery. To find that bravery, I return to the first mangy coyote I saw. If it was me, and my skin was covered in itchy sores and lesions, my organs were hemorrhaging blood, and my movements were growing ever slower, I’d likely give in, lay down, and let death take me.

But, that first mangy coyote I watched struggle to keep moving through a roadside ditch did not give up. She kept moving in an effort to fulfill her species’ ancient role as a trickster lesson-giver.

Posted in Animal News, Community, Editorial, Humane Education, News Release, Wildlife Info
×
...
×
...
×
...
Do NOT follow this link or you will be banned from the site! Scroll To Top